In 1871 a plot of land on the south side of the town known as the Leighton district, close to the North Staffordshire Railway, was acquired, later to become the Leighton Ironworks. This is the site of the present factory, but initially the works consisted of a three-storey building occupying a ground space of about 50 feet by 20 feet. The ground floor of the building was used as a combined foundry, engine house and machine shop. The second floor was a fitting shop and the top floor a pattern shop.

With the opening of the Leighton Ironworks, the Bamford range was increased to include oil cake mills, sheep racks, horse gears, haymakers, milk carriages and horse rakes. The total labour force at works when it was opened was six, but demand for Bamfords products increased rapidly and during the period 1876 – 1877, an old wages book tells us that the average number of men employed was 30.

It is interesting to note that although Samuel Bamfords father, Henry, had helped his son to found Leighton Ironworks in 1871, he did not take any part in the running of the business but devoted his time to the ironmongers shop. However, in 1878, he joined his son and started travelling extensively as an agent in the Midlands and beyond, selling the products of the firm.

About this time his brothers John, Henry, Robert and Joseph joined Samuel, and a flourishing partnership was started. John was responsible for office management, Henry for purchasing and advertising, Robert was on the sales side and Joseph, like his eldest brother, was an engineer and became a fine ambassador for the company both at home and abroad.

Of “Mr. Sam” it is said that had he not chosen to become an engineer he could have been equally successful as an architect, for he played a large part in the planning of the Catholic church and St. Joseph’s School, Uttoxeter.

In 1881, the Bamford catalogue ran to forty pages and listed a complete range of “agricultural machinery, patent chain and lift pumps, etc.” The patent chaff cutter offered in the catalogue was described as “an extraordinarily cheap machine, which would cut two lengths of chaff by altering one screw.” It was priced at £2 / 2s.

Root pulpers, turnip slicers, cake mills and horse rakes were illustrated in profusion, each showing the intricate casting work now being undertaken in the Leighton foundry.

In 1882, a milestone for the company was reached with the introduction of the “Royal” No. 5 horse-mowing machine ––– a machine that was going to make Bamfords famous. The Royal was an immediate success, its design incorporating extra high wheels “enabling the horse to trot without injury to the machine.” It took prizes wherever it was shown or demonstrated, was almost noiseless in work and “when travelling all the gear wheels were entirely out of motion.” Price of a two-horse model having a four foot three inch cutting bar and two knives was £16 / 10s.

The Royal was made in a number of versions, one and two-horse, each with a right or left-hand cut. This mower and other machinery in the range proved to be very popular and were supplied to the governments of Europe and the Colonies. 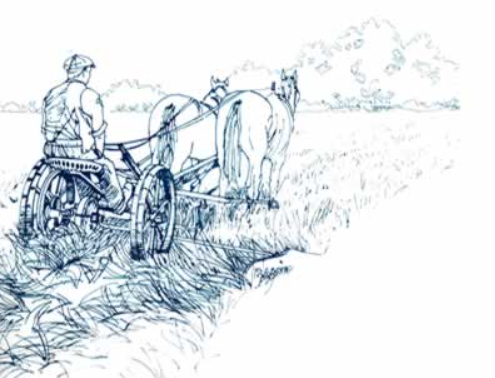