It was early in the 1920s that the directors were called upon to face a problem of some magnitude. Due to a changing pattern of trading, a number of agricultural engineering firms were contemplating the formation of a large combine to be known as The Agricultural and General Engineers Ltd. Bamfords were invited to join.

After careful examination of the proposal, Bamfords decided that they would remain outside the combine, a decision that subsequently proved to be a wise one as The Agricultural and General Engineers Ltd. Went into liquidation after a few years trading.

Until 1920, the company had only manufactured agricultural machinery but, in that year, they entered the stationary engine field with the introduction of two horizontal oil engines of 2.5 and 5—6 b.h.p. respectively. The company had recognised the demand for these engines to drive barn machinery, dairy appliances and sheep-shearing equipment that were now being used in ever increasing numbers. Their 5 h.p. engine was awarded the Royal Agricultural Society of England’s Silver Medal at Darlington in 1920. These engines were “guaranteed to give satisfaction” and a special department was established at the Leighton Ironworks to produce them by “modern methods.”

In July 1920, a minor disaster hit the works, which, it was reported, were flooded with 18 inches of water in the moulding shop, and 100 workers were unable to work for about a week.

At this time the catalogue of Bamfords implements included the “Triumph” potato digger, a machine fitted with six sets of digging forks to ensure clean lifting of the entire crop although this machine had actually been introduced in 1909. A report said “We journeyed to Uttoxeter to witness the début of the ‘Triumph’ potato digger. We examined the potatoes to note skin abrasion or other evidence of rough usage, but we were foiled in our quest, since neither a cut nor a scratched tuber could be found. It was at this juncture that we formulated the pertinent question ‘Were these potatoes sown specially for the purpose of this trial?’ —— the reply was an emphatic negative: the plot had been selected solely on its close proximity to the Leighton works!” The “Triumph” digger was extremely popular and models were sent to, among other countries, Poland and Russia.

By now, Bamfords machines were being sent all over the world and in April 1921, a letter was delivered to the works from Nigeria addressed simply to Bamfords Ltd., Royal Mowers and Reapers, with no town, county or country!

Samuel Bamford celebrated his 80th birthday in 1925 when a special peal of Grandsire Triples was rung on the Parish Church bells. This was prior to the period of industrial unrest that was to terminate with the General Strike in 1926. Manufacture continued at the factory although rail despatches caused considerable difficulty.

Again in 1927 extensive floods hit the factory, with water in some places reaching a depth of more than two feet, making all of the moulding sand in the foundry useless. A local report of the time states that “the moulding shop looked like a bog.” A more light-hearted side to the floods was that several fish were caught in the streets adjoining the factory!

1928 saw the death of Henry Bamford, a brother of Samuel, and was affectionately known as “Stafford Harry” as he lived in Stafford, travelling to Uttoxeter each day by train. 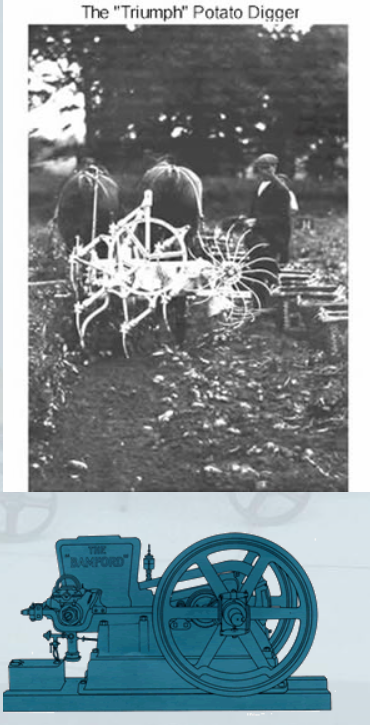