By 1891, it became necessary to obtain more factory space due to the increased demand for Bamford products. Ten cottages and a warehouse in the Spiceal Street area were purchased from a Mr. John Hall with this area eventually becoming part of the spare parts store. A further large purchase of property at about this time enabled the company to extend their “sheds” on to the Bridge Street area.

Looking ahead, the Implement Review of July 1891said “The rapid progress which has of late years been made by H. Bamford & Sons of Uttoxeter into the front ranks of English agricultural engineers and implement manufacturers, seems to be only a foretaste of the further advance upon which they are bent.”

In fact, this journal waxed lyrical of the company in an earlier issue where it was reported “’There’s magic in the web of it’ to quote Othello’s impassioned outburst, might well be said of H. Bamford & Sons exhibits of the Leighton Ironworks, Uttoxeter, for the manner in which they were finished and staged justifies this significant encorium.”

By October 1893 separate lists were published, the Rapid Mill list dealing with grist mills exclusively and containing 138 “testimonials to their efficiency.” The Bamford Chaff Cutter list illustrated 15 patterns and touched upon their safety. Other lists illustrated horse gears, disc root cutters and oil cake mills. In fact, it was suggested that “vendors of implements and machinery were never so well off as they are today for gratuitously conferred trade literature. With that which is so freely supplied, they should now find it easier than ever to widen their business operations. Supineness in distributing such lists as uphold the business reputation of the firm on whose behalf they trade is not only short-sighted but positively sinful.”

The Leighton Ironworks now covered an area of 10 acres and employed 400 people. It adjoined the North Staffordshire main railway line and sidings were connected with the goods department where, in a busy season, it was not unusual for 50 wagonloads of implements to be despatched in a day to all parts of the world.

Competitive trials of agricultural machinery were very popular at the turn of the century, not only in the United Kingdom but throughout the world, and Bamfords were not slow in entering their machines in these competitions. Great success was achieved with the “Royal” horse mower ––– noted for its durability, efficiency and lightness of draught.

The Staffordshire Post, reporting on “Our Local Industries” in May 1895 said, “Bamfords ‘Rapid’ grinding mills are gems of perfection and the grinding discs of these mills are made of a specially hard metal, conical in shape. Being reversible, when one side is worn out an ordinary farm labourer can turn the discs over to grind with the other side.”

With the increasing demand for Bamford machinery, it was obviously necessary to improve the manufacturing facilities. We read that “the pattern shop was fitted up with wood-turning lathes, circular saws and the most modern labour saving tools. A tramway ran through the moulding shop for conveying the molten metal to the moulds. About 12 tons of metal were being melted each day in the furnaces.”

In the centre of the works, there was a large engine to drive the machinery, a 20 horsepower unit built by John Chadwick of Princes Bridge Ironworks, Manchester. This engine, becoming known affectionately as “Old Sarah”, was housed in an engine room laid with encaustic tiles presenting “quite a study of artistic decoration.” Power from the engine was conveyed by an 18 inch wide driving belt. 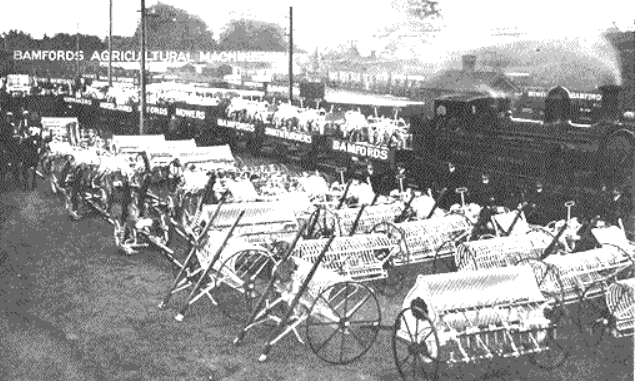