However, these arrangements did not proceed without incident, for early in November 1967, J.C. Bamford (Excavators) Ltd. Made an offer for the whole share capital of the company. The Board of Bamfords Ltd. reacted unfavourably to this bid, as J.C. Bamford (Excavators) Ltd. had failed to obtain sufficient acceptances from their shareholders which resulted in the bid being finally withdrawn.

In any progressive company, there is always a demand for administrative staff, technical staff and skilled men. In 1967, an apprentice training school was started at the works providing opportunities to undergo training in engineering careers. These apprentices were accommodated in a residential hostel located near the factory and it is encouraging that so many of them remain with the company upon completion of their training.

The company’s marketing policy has always been to provide a first class distribution and after-sales service for farmers both in this country and overseas. In the United Kingdom, the company has depots at Mildenhall in Suffolk and Friokheim in Scotland and, as a further back up, there are some 14 buffer stocks of spare parts carried by strategically placed dealers so no farmer should be many miles from a source of supply.

Overseas, two wholly owned subsidiary companies have been formed, one in Dublin in 1967 and the other in Brussels in 1970. The Dublin company was for some time under the general management of George Eames, who is now on the Board of Bamfords (Ireland) Ltd., and since the formation of this company, sales of Bamfords products in Eire have increased each year. Looking to the future, Bamfords SA in Belgium typifies the company’s interest in the European market, with this subsidiary supporting sales both in Belgium and Luxembourg.

As mentioned before, exports of Bamfords products have developed over the years and lists are printed in every European language plus Afrikaans, Arabic, Burmese and Japanese. The firm now exports to approximately seventy countries each year and an interesting fact is that over 90 % of all engines produced are exported. Naturally, such a high level of exports involves attending all of the national agricultural shows in Europe, in addition to extensive overseas travel, which is undertaken by commercial and technical directors and senior executives.
Today, the plant covers approximately 750,000-sq. ft. and with surrounding land, occupies about twenty acres, currently employs 700 people with all machines now being produced on assembly lines.

The welfare and comfort of employees is of prime importance and, in addition to the first class working conditions in both the office and the factory, excellent amenities are provided for leisure and recreation. Included amongst these is a social club and a sports ground for cricket, football and tennis.

In 1970, Richard Bamford, who had been director of engineering for the past three years, relinquished his executive responsibilities but remained a Board member. John Varley, who had joined the company in 1968 as commercial director, and John Bamford became joint managing directors. At the same time there were two additions to the Board namely John Skae who was the company secretary and Robert York, formerly chief accountant, who became financial director.

Thus after 100 years, there are still three members of the Bamford family actively engaged in the business of the company.
Since the days when Henry and his son Samuel started the business in 1871, there have been many changes. From ironmongery to comparatively unsophisticated animal-driven machinery was a big step.

But the transition to the more complex equipment required by the highly sophisticated farming methods of today is even greater. Bamfords have achieved this transition and now, backed by modern methods of production, by electronic data control and a distribution organisation that spreads around the world, they offer one of the most comprehensive ranges of farm machinery — the products of 100 years’ experience. 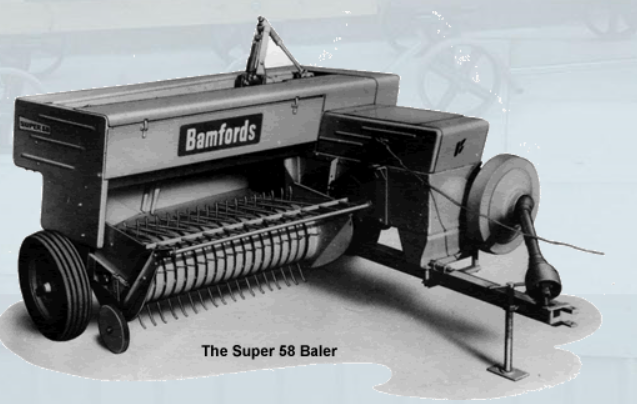