On October 27th 1896, Henry Bamford, the founder of the present company, died after some years of failing health, but the family ties with the company were further strengthened when, in the same year, Samuel’s two sons, Henry and Oswald, joined their father at the Uttoxeter works.

Looking back over the years 1891 —-— 1900, it was very apparent that they had been successful ones for the company and that the partners had taken full advantage of the growing increase in farm mechanisation. It is of interest that by the year 1900, the partners had purchased almost 20 acres of land, including the Hockley Field in 1898 on which the present foundry, machine and fabrication shops now stand. Today, this part of the factory is known as the West Works.

The company’s catalogues of this period reflect the increase in harvesting machinery with “Royal” mowers and reapers, combined self-acting and manual horse rakes and double-action haymakers taking up more space. In 1881, the catalogue ran to 40 pages, but by 1900 it was doubled in size.

In 1897, the year of Queen Victoria’s Diamond Jubilee, the eldest son of Samuel Bamford, Henry, reached his majority. The occasion was marked with a dinner given by the company to its 500 employees. Uttoxeter Town Hall was chosen for the banquet and it was reported at the time that “ladies graced the board with their presence.” Continuing, the report went on to say “This is a feature of majority celebrations at all times most welcome and appropriate, but it seems to us especially so in the Jubilee Year when the hearts of all her subjects are so warmly moved toward the Imperial Lady who sits upon the throne of this colossal empire.” 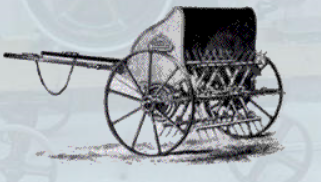